By Dannie April 01, 2011
The day just keeps getting better. Angry Birds, probably one of the most addicting games of all time is officially hitting every console. Xbox 360, PS3, and the Wii may seem like enough to the average person. Rovio wouldn't let something like this slip by, they've really gone ahead and retrofitted every possible console. Maybe it's been a while since you had a console? Don't worry, just dig through your basement, attics and childhood toy chest. I'm sure there's a Virtual Boy, or Game Bay Classic somewhere there that you can power on for some Angry Bird's!

"Uh oh, those pigs are at it again! It's up to you to wipe them out in the new Angry Birds adventure! Dive, peck and crash your way through 60 exciting levels and get your precious eggs back! Simply aim and fire your bird at your nefarious foes without losing all your allies. Hit the golden egg and you can unleash the dreaded Golden Eagil! Get Angry This Summer!" 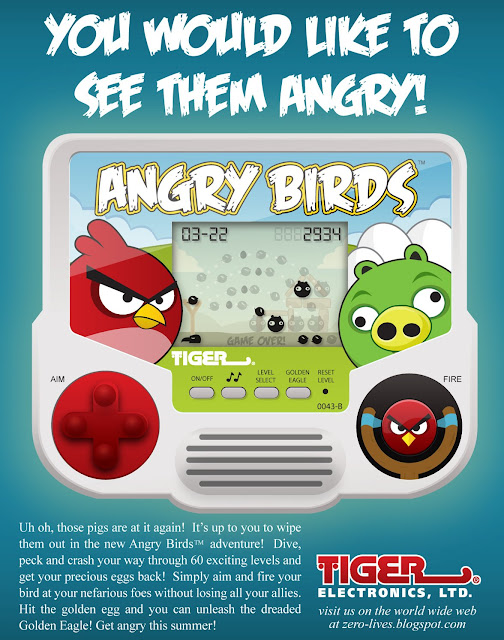 Popular posts from this blog

By Dannie July 20, 2010
As a previous Best Buy Geek Squad employee I use to say "eh, maybe" to extended warranties when asked by many of those who purchase electronics and such from Best Buy. (They use to force us to say "Geek Squad Black Tie Protection" but we all know what it really is). Note, the Geek Squad Black Tie Protection GSBTP was previously known as PSP or Product Service Plan. Even I personally purchased it on some items like notebooks. Although I can repair any defects that may occur, I could not pull parts from my hind end. I now redact and advise all to consider the alternative. Don't get me wrong, I've never had a bad experience and they do cover what they say they will cover. Assuming the sales person gave you correct information, or didn't bend the truth to make their individual goal sheets look better. My reason for the change of heart is an alternative company who covers more , for less . Sometimes they even have sale pricing on warranties. Best B
14 comments
Read more

By Dannie November 11, 2013
This is why Cyber Monday and Shopping online is better than Black Friday Black Friday & Cyber Monday The best deals on all Black Friday & Cyber Monday purchases ironically do not occur on their designated dates. It's an old marketing trick, the best deals actually occur the weeks before Black Friday and Cyber Monday. Even in brick and mortar stores like Best Buy, you'll find the deepest discounts the week prior. Fortunately, you're a smart shopper and know that shopping online beats all the lines and get the best deals. Not to mention that if you have Amazon Prime , you'll get 2-day free shipping . So as you can tell, there is a large cost savings by doing it online. Depending on your state, you may not even have to pay taxes on your purchase up front. Playstation 4 These consoles aren't out just yet, but that doesn't mean the pre-order sales aren't available. Amazon has an excellent deal starting 9:00 AM PST on 11/12/2013. Pre-orders
Post a Comment
Read more

By Dannie November 27, 2013
Boycott Black Friday and Still Get Great Deals Stores like Best Buy, Sears, Walmart are opening way too early and ruining Black Friday. It's a sport for some, and that is fine but when you start opening stores early on Thanksgiving evening, you've gone too far. It's sad, and you really should be focusing on spending time with family. As a prior employee of Best Buy Geek Squad I remember having to go to bed at 7PM Thanksgiving night just to be up and at the store by 4 AM in the morning. That was terrible enough, but at least I was able to enjoy most of Thanksgiving. Stores are now opening as early as 8PM, that means time with family has to be cut. Therefore it's easy for me to agree with groups all around the world boycotting. The trouble is, it's hard to boycott a good deal. Well, it's time to get smart and move your shopping all online. This way you can spend the day with your family and even do a little shopping while avoiding the long lines and li
6 comments
Read more