Our drive to Underwood, Indiana. 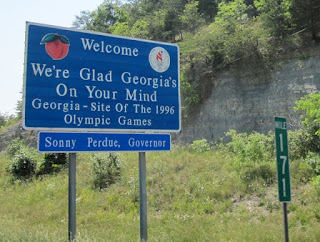 It's not that I have anything bad to write about, but there's just so much to say and do. I'll try to pull a couple of minutes and put some sentences together that hopefully make sense.

I'm sitting outside, and I can't stress how awesome the weather feels. Much different from humid 90 degree Florida weather. The ride wasn't terrible as I thought, but it was enough to convince Sayum that we'll be flying from now on. Now just got to calm her down while entering a plane.

We traveled 800+ miles in 13 hours and 27 minutes to get to this very peaceful small town, Underwood, Indiana, that Sayums "Mamaw" lives in. Sayum drove only 200 miles out of that 800+ which is fine with me, since it was mainly Florida where she was mostly familiar.

As I said, I'm sitting outside as I write this, and the sound of the country were really never that interesting to me until now as I sit outside just enjoying my surroundings.

Speaking of our trip up here, we thankfully only saw 1 wreck in the whole distance we traveled. It wasn't anything serious, but while driving through nearly all of Kentucky it was raining pretty bad and it appears someone spun out into a ditch/hill/mountain thing. 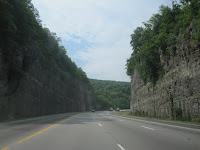 Driving through mountains and mountains sides brought back a lot of memories from long ago when I lived in Venezuela as a 5 year old. Memories I didn't even think I still had, but you know it's true, your surroundings will bring back old memories you never knew you had.

I'm currently tethered, but there isn't much of a signal here. Bear with me as images will be compressed until we get out to a better signal where I can upload full resolution images.

Everyone always talks about a true Country breakfast. I think I had my very first one. Natural eggs, plenty of bacon and home made biscuits. Sayum of course had biscuits and gravy, but that's a little to Country and to brave for me! 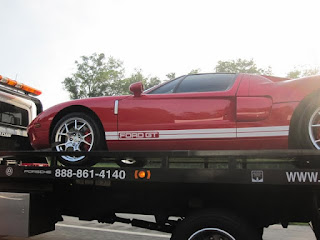 Gas is significantly cheaper around here, and luckly we only used about 2 1/2 full tanks on the way up. So it wasn't a killer but I would of loved to fly. There just isn't anything like flying. Although I'm glad I did get to drive this time since I haven't seen mountains that close in so long. Better yet driving through them.

Atlanta, is still one of the funnest drives. A lot of people warned me how stressful it may be. We hit it at around 2 PM and it was packed but I actually enjoyed it. Just had to keep an eye out for signs, as they have a tendency to move your destination lane quickly. I do have a quick video I'll throw up at some time. Sayum on the other hand was stressed driving through Atlanta, I found Tampa city much more stressful to drive in. This was my second time driving in Atlanta. Sayum did request the next time we drove through Atlanta, that she'd be allowed a secondary brake pedal on her side.

Little Geek moment for everyone. The gas station we stopped at called "Sad Sam" had a register in which every time the clerk scanned something, it would make the same sound Sonic 2 made when gathering rings. If your card was denied or something went wrong, it also made the same sound from that old chat client ICQ, you know the "Uh-Oh"! 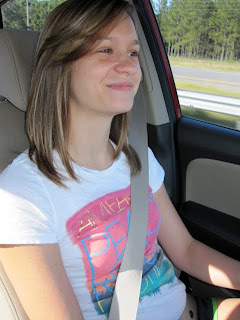 As far as entertainment on the road, well we both had our iPods. Unfortunately mines been connected to my headunit for so long the battery didn't last long at all. Guess it's time for a replacement on that old 30GB. Sayum's is much newer but she had been using for a week or so in her car and it died a few hours after mine. So we listened to ourselves think for a bit, then entertained each other the rest of the way. After driving for so long though, you actually get tired of all music anyways, so we're thankful it died.

Something I've seen here, that I've never seen before is Log homes. They're actually really beautiful, but I doubt they could withstand that torture of Florida weather.

Only one Con so far, smoking in public places. In Florida we are lucky enough not to have to worry about smokers in gas stations or especially restaurants. Not sure if the same law applies here, but if it does, it was ignored at the local corner store. We'll see how it is when we go out to eat later and hear the dreaded "Smoking, or Nonsmoking?" question.

I apologize for the scattered thoughts these blogs may be, but I've started and stopped many times and that tends to happen.

That's all for now, I'm hoping we'll be able to go to Fourth Street Live later. I'll get back with everyone at that time, until then please let us know of anything we have to see!

Keep up with our Roadtrip 2010 photo album here.

Popular posts from this blog

By Dannie July 20, 2010
As a previous Best Buy Geek Squad employee I use to say "eh, maybe" to extended warranties when asked by many of those who purchase electronics and such from Best Buy. (They use to force us to say "Geek Squad Black Tie Protection" but we all know what it really is). Note, the Geek Squad Black Tie Protection GSBTP was previously known as PSP or Product Service Plan. Even I personally purchased it on some items like notebooks. Although I can repair any defects that may occur, I could not pull parts from my hind end. I now redact and advise all to consider the alternative. Don't get me wrong, I've never had a bad experience and they do cover what they say they will cover. Assuming the sales person gave you correct information, or didn't bend the truth to make their individual goal sheets look better. My reason for the change of heart is an alternative company who covers more , for less . Sometimes they even have sale pricing on warranties. Best B
14 comments
Read more

By Dannie November 27, 2013
Boycott Black Friday and Still Get Great Deals Stores like Best Buy, Sears, Walmart are opening way too early and ruining Black Friday. It's a sport for some, and that is fine but when you start opening stores early on Thanksgiving evening, you've gone too far. It's sad, and you really should be focusing on spending time with family. As a prior employee of Best Buy Geek Squad I remember having to go to bed at 7PM Thanksgiving night just to be up and at the store by 4 AM in the morning. That was terrible enough, but at least I was able to enjoy most of Thanksgiving. Stores are now opening as early as 8PM, that means time with family has to be cut. Therefore it's easy for me to agree with groups all around the world boycotting. The trouble is, it's hard to boycott a good deal. Well, it's time to get smart and move your shopping all online. This way you can spend the day with your family and even do a little shopping while avoiding the long lines and li
6 comments
Read more

By Dannie November 11, 2013
This is why Cyber Monday and Shopping online is better than Black Friday Black Friday & Cyber Monday The best deals on all Black Friday & Cyber Monday purchases ironically do not occur on their designated dates. It's an old marketing trick, the best deals actually occur the weeks before Black Friday and Cyber Monday. Even in brick and mortar stores like Best Buy, you'll find the deepest discounts the week prior. Fortunately, you're a smart shopper and know that shopping online beats all the lines and get the best deals. Not to mention that if you have Amazon Prime , you'll get 2-day free shipping . So as you can tell, there is a large cost savings by doing it online. Depending on your state, you may not even have to pay taxes on your purchase up front. Playstation 4 These consoles aren't out just yet, but that doesn't mean the pre-order sales aren't available. Amazon has an excellent deal starting 9:00 AM PST on 11/12/2013. Pre-orders
Post a Comment
Read more